“I was afraid for my son, but the doctor’s office was closed.”

We asked some of the people we’ve helped for their stories so we could excerpt them for our testimonials on our front page. When Tina Robinson shared hers, we wanted to share her full story.

I wondered whether Nicole was for real, and my husband was completely sure she wasn’t.
When I heard that Nicole had different ideas for allowing the body to heal itself, I doubted that she knew what she was talking about. My husband and I both majored in nutrition at college and have worked for years in healthcare as Registered Dietitian and Dietetic Technician, so we both have a strong background in mainstream nutrition.  When we heard her ideas about how to take care of our sick child…they were completely new to us. I was tired of bad side effects from drugs. I wanted to believe Nicole and was willing to listen, but I admit that I was very reserved. My husband was completely skeptical.

One New Year’s Day, our son developed a bad case of hives.  I was afraid for our son but the doctor’s office was closed, so I asked Nicole what she thought. I sent her some photos of his hives and, after asking a few questions, she made a few simple suggestions for foods and vitamins that she said matched his situation. I figured, “What could some juice and vitamins hurt?” and tried what she said. To my amazement his hives disappeared, not in days or hours, but within a half hour of doing what Nicole said to do.  It was astonishing!  Later that evening, the hives returned and, to our astonishment, the repeated treatment worked again! There REALLY was something to this!  That really made my husband stop and think.

Awhile after that, another son woke up late in the night with a terrible headache, stomachache, and a fever. He was begging us to do something to help him. I was desperate and we were afraid that we and our large family were all about to get sick with the stomach bug. We hated to see him hurting so terribly.

That’s when it clicked for me.
I didn’t have to call a doctor OR Nicole in the middle of the night.  I could use more of my new found knowledge that I had learned from Nicole and perhaps I had an idea of what to do to help our son.  Normally I would have given him acetaminophen every 6 hours, but instead I gave him a special bath plus alkalinized water to drink and within a few minutes he was perking up.  We watched as his headache, stomachache and fever went away.  Our son was so grateful and so were we.

I remember actually laughing about what I was watching happen.  It was so simple, so basic.
He slept soundly that night and woke up in the morning feeling fine.  I continued monitoring him and was able to avoid a relapse.  That was a major turning point for my husband. 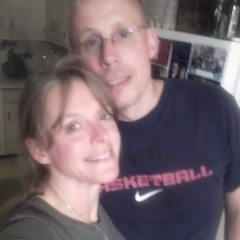 Tina with her husband

Since then I have learned to think more critically, and to think about the big picture.  What we have experienced has brought joy on one side and sadness on the other.  Why don’t we know about these things?  Naming sicknesses and diseases puts them into a box of sorts.  It tends to keep us from looking beyond the symptoms instead of looking at the basic truths.  Those truths are found in questions like, “Why is the body responding the way that it is?” or “Is what is happening right now a deficiency or toxicity?”  or “What does the body need in order to fight what is happening to it?”  Nicole is focused on those kinds of causes in order to bring about permanent relief to the symptoms.  Everything is individualized to the person and their situation. It’s a very different mindset, and I know that I have a lot of learning, as well as relearning, to do.

I also know that I have begun developing a real toolbox of knowledge that has changed the way I think about health.

Before, I was constantly calling the doctor with my kids’ ailments. But with what I have already learned from Nicole, I know how to help them get better and correct the causes of most of their symptoms.

The benefits of this expand beyond ourselves.  I have shared my knowledge and have helped others with it.  My 91-year-old grandmother was diagnosed with pertussis, also known as whooping cough.  Nicole had the information that we needed to help my grandmother.  With supplementation, she went from struggling with a dangerous, choking cough to being able to cough up the phlegm and find relief.  It only took 8 hours to see this result and to see that my grandmother was actually feeling more spry than she had felt in months!  She had more energy and was brighter, yet she had pertussis!  It seemed unbelievable and soon her caretakers slacked off the supplementation, thinking it had been only a mild case of pertussis that had resolved on its own—but the cough came roaring back. They quickly realized their error and resumed her supplementation and, thankfully, she recovered quickly in comfort and safety.

I’m so grateful for what I have learned.  I believe that we are building up our health as a result of that learning.

This is real.
It’s not a quick fix, pop-a-pill program.  It’s a multi-faceted, ongoing learning process.  Unfortunately, we are a society that wants to “not think” and we want everything NOW!  We NEED to think and we need to take the time to learn basic truths.  I’m thankful for Nicole’s research and advice.  I know that she practices what she teaches too.  She has made the thinking part easier through her clarity in explaining what she knows.  With Nicole’s help, my hopefulness has turned into real, live results.

Read about a topic